It is difficult to imagine our world without video and its related technologies. We use high-bandwidth video and imaging applications every day in products such as HD televisions, smartphones, tablets, driver assistance systems, HD projectors, video conferencing, digital cinemas, remote video surveillance and medical imaging applications.

These latest technologies require real-time video processing. The processing and transport bandwidth requirements of 4K, UHD and emerging 8K resolution applications are such that they cannot be delivered by RISC-based processors. ASICs and FPGAs are the only viable options for delivering high-end processing at resolutions of 1080p and beyond.

Hardent’s team of engineers and consultants has been involved in many different aspects of the video industry including:

Hardent’s VESA DSC-compliant encoder and decoder IPs are the first of their kind on the market. These ready-made IP solutions help electronics manufacturers quickly integrate the VESA DSC standard into ultra high-definition products where 3-1 visually lossless and ultra-low latency compression is needed.

Projects that Hardent has worked on in the video industry include: 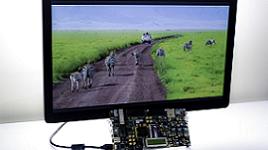